What the hell is “Initiative Q”?

Overlooking Initiative Q is almost impossible. Why? Because thousands of people spam a referral link via social networks. Of course I wonder what is behind it.

In the article you will find the following:

Update 1: There is an answer from the founder, I added it at the end of the article.

What is “Initiative Q”?

In short: Initiative Q is first an idea for a payment network with a private currency. There, users can invite other users and earn “Q-Tokens” at the same time, which hopefully will be worth something at some point.

So I wondered why it needs a new payment system…Keyword “Paypal”.

“Many of the ideas that the Q initiative will contain already exist in some form, but so far they have found only limited acceptance, and there is no universal system that integrates them all. This is due to a classic chicken and egg barrier: No buyer wants to join a new network without a seller, and no seller will offer a payment option that no buyer uses. Initiative Q will overcome this barrier by distributing its currency Q free of charge to early adopters, thus creating an incentive for its introduction and use.”

Hmm. Before we come to the “free distribution”, let’s look further at what the idea is:

“The cards and cash in our wallets are obsolete to identify us and keep track of our funds. These functions can be easily integrated into a smartphone. You can easily go into a store without your wallet, and your payment account is quickly identified using digital methods such as a QR code or an acoustic code. An RFID sticker on the phone can be used as a backup when the battery is empty.
Checking out can be further simplified. With the Q-App you can enter a store, scan the barcode of the desired items with your mobile phone camera and simply go out. In restaurants, you can simply go when you’re done, as your phone pays the bill directly to the restaurant’s server. No marking of the waiter, no delays.

It’s also not necessary to fill out forms every time you visit a new online store. Once you’ve authorized your device, you’ll be automatically identified and can confirm payment with a click.

Companies like Apple, Google and Amazon have developed such features, but they are still used in a small part of the transactions. Initiative Q will make them the standard.”

As I read it, I thought some of the described goals are already possible by payment systems. Also, standardization is already progressing. In addition there are already similar payment systems – Google Pay for example. But I give one point to Initiative Q: With its success it would go perhaps faster. And here we come back to the “free currency distribution for early adopters”. The idea is to gather as many people as possible to give the payment system a vote of confidence. Because why do we use currencies, among other things? Because we trust that we can pay with our banknote.

But that is precisely one point of criticism… we will come to that.

Who is behind Initiative Q?

Saar Wilf founded the potential payment system. He himself has gained experience in the payment system business. He sold his company “Fraud Sciences” to Paypal. As far as I know, the first thing he did on the website was to claim he was “co-founder” of Paypal. Meanwhile this does not appear any more. But that doesn’t seem serious. I think they wanted to create additional trust here.

Another player is Lawrence H. White. He is an economist at George Mason University and works out the concept for the currency. He is also very interested in the Austrian school of economics.

What is the “Q currency/Q token”?

The Q is the currency of the payment system. Nothing can be done with it at the moment. But the idea is that a “Q” is equal to a US dollar and can be used for payment.

How will the product be marketed?

The project is based on two horses: the creation of a payment network and a currency. Now only the users are missing. For this they have decided on a system that does not go down well with everyone and causes bad press and sceptical opinions:

You have to be invited by another user and then receive a certain “Q amount” credited to your account. Then you have the opportunity to invite more people to join you.

In other words: Invite people and earn money.

On the one hand, this is an advantage because many users can be attracted to the platforms. On the other hand, it raises the question of whether the serious-looking platform is spam/scam.

Why? Because it looks a lot like a pyramid scheme. Initiative Q also takes this into account in the FAQ position:

Now you should invite more people to earn even more Q-Tokens.That sounds like: “For the next 14 days you can invite and verify up to 5 friends and secure 4,351 for each. Your invite will allow them to also reserve Qs early, and help expand the Q network.” 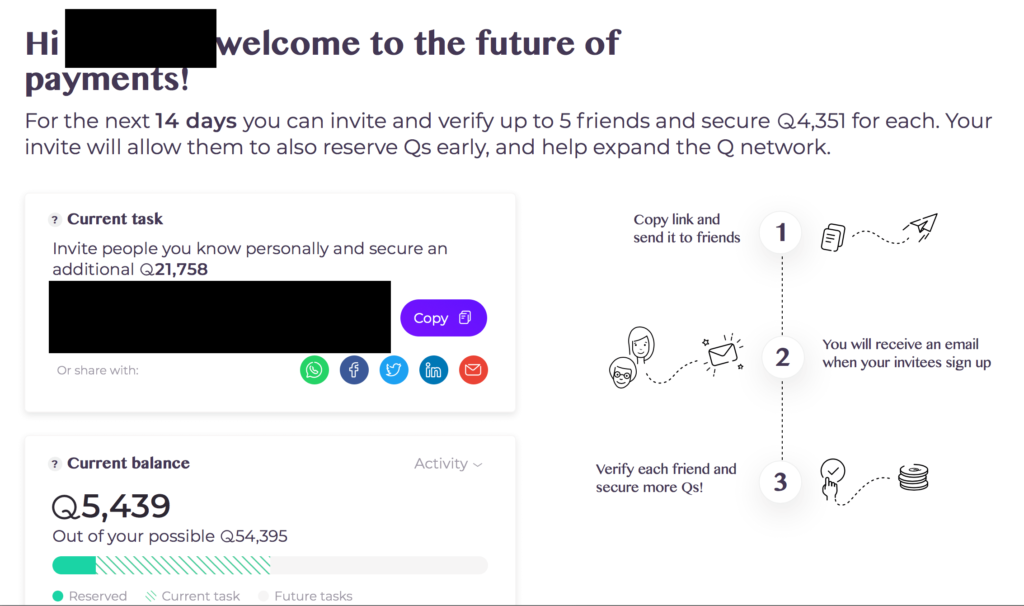 What also disturbs me a little is that such an extreme psychological pressure is built up to do everything very quickly or to miss something by waiting too long. As for example on the start page. There you’ll see what amount you might get credited – but it’s constantly ticking down.

I recently came across an article that praises Q to the skies. Of course it all sounds fantastic, but I think there’s a potential drawback that should be specifically pointed out.

A spokesperson for the platform said that data is not passed on to third parties or marketing companies, but what if the business model doesn’t work out?

Then the founders sit on an e-mail list that has it all. Or as another author put it nicely, what information is in such a mail list:

I am skeptical, but have decided to register. Why did I want to know? Basically, I wanted to know what the system would look like after registration. In the end, I went after David Gerard, who said that “they’re not crooks, although it’s a bit off to create your mailing list based on a pyramid scheme“. However, I was careful: I signed up with a small name change and a completely new mail address. You can also listen to a small radio report by Gerard, which clearly breaks down many things.

If you want, you can also register via my invitation link and secure your “Q-currency”. However, I don’t post this link publicly because I have registered myself with caution. If you have considered this with the registration, then contact me on Social Media like FB or Insta, and I send you then the link.

And Forbes has also devoted himself to the topic: “Is Initiative Q the new Bitcoin?”

David Gerard posted the answer from Wilf on his blog. I take the liberty of reposting it:

Thank you for taking the time to review Initiative Q. This “economic experiment” is indeed taking off and gaining increased support from the public worldwide. Overall, your reviews were fair, albeit less optimistic than what we would have hoped for. Mostly, we’d like to thank you for clearly stating that our intentions were sincere and that we were not crooks.

We do want to point out a few inaccuracies you may want to reconsider:

• You insinuated that we marketed the Q as a “get rich quick” scheme. Our publicly available timeline clearly states that even if everything goes according to plan (also clearly stated that this in itself is far from guaranteed), it will still take years until Qs becomes valuable.

• You state that Initiative Q is a “straight up pyramid scheme”. Wikipedia’s explanation of pyramid scheme begins with “In a pyramid scheme, an organization compels individuals who wish to join to make a payment.”. This statement clearly does not apply to Initiative Q. What we do is no different than referral programs of companies like DropBox, AirBNB, Uber and many others.

• Most importantly: You did state that our privacy policy was good and respectful. Thank you for recognizing that. In addition, we have stated clearly that even in the case that we do not reach the critical mass of users we are after we will still not sell the little personal information we have. I have never in my life done something remotely similar to that, and have no intention or reason to start now.

Even from a cold business perspective, a database of merely names and emails may be worth a few tens of thousands of dollars at most. On the other hand, the fines and lawsuits we would incur will result in penalties hundreds of times bigger, and permanent damage to the team’s reputation. It makes no business sense to do so and I would appreciate if you clearly convey this message in your blog and when approached for comments.

To be absolutely clear: If Q does not succeed we will destroy this database.

BTW – I saw you were also involved with RationalWiki. You may want to check a separate project I founded called Rootclaim which uses proven probabilistic models to generate the best rational analysis for very complex problems.

What the hell is “Initiative Q”?

How the MSCI ACWI simplifies your pension provision by 100 %

The Punishment of Risk Investors